One of the most talked about contemporary classical compositions of the decade. 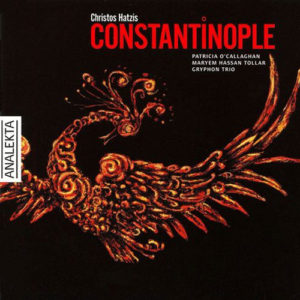 Before embarking on the Constantinople journey, Christos Hatzis and the members of the Gryphon Trio envisioned a work that would take chamber music in new directions and bring it to audiences far beyond its traditional realm. The Trio was intrigued by the composer’s ability to utilize the musical sounds and textures of diverse world cultures in his own music. The composer and members of the Gryphon Trio also shared an interest in exploring the connection between music, movement and visual imagery with collaborators from other artistic disciplines.

Hatzis’ overall concept for Constantinople started to take shape in 1998 and the Gryphon Trio premiered the musical “spine” of the work with singers Jean Stilwell and Maryem Hassan Tollar in 2000 under the auspices of the Music TORONTO series. The overwhelmingly positive public and critical response to Hatzis’ new work fuelled a four-year process during which the multimedia theatrical presentation of Constantinople was fully conceived and realized.

Constantinople has been performed in the United States, London’s Royal Opera House, and throughout Canada. Built on a musical foundation that celebrates the power of chamber music, Constantinople is realized through a union of media and artistic practices and captivates audiences accustomed to theatre, opera, and ballet production values.